Recently I have been experimenting with a lot of virtual plug-ins for guitar. Let's look at why the guitar is such a unique instrument and why it sounds so good through an amplifier.


Feedback
The biggest interaction we see with the electric guitar and amplifier system is the feedback loop that is inherent. The sound produced by the metal strings is picked up by the pickups, then fed down the guitar cable into the amplifier, which then produces a much higher SPL into the room. This sound then has the potential to hit the guitar strings again and sympathetically vibrate them causing the sound to be picked up again by the pickups. This is very apparent in the traditional metal guitarist holding his or her guitar up to an amplifier to get the system to feedback. Even when far away, the slight feedback loops that occur at higher frequency levels contribute to the overall sound of the guitar, thus something that is lacking with an electric guitar plugged directly into a computer or tablet and using a virtual instrument to produce the amplifier tones.

Recording
When recording, the interaction of the guitar and the amplifier as well as the floor producing some interesting reflections and feedback options. Particularly, as Alex Case stated in an AES journal entry, the interaction with the floor and vs the direct sound from the amp produces a comb filtering effect which can either aid or hamper the recording process. 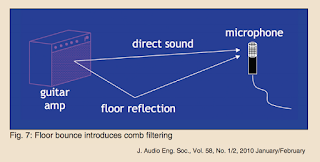 So, we can use this interaction to be part of the tone, or we can try to reduce the interaction by adding carpeting, raising the amp or reducing the distance of the mic from the amplifier. We can also play with the distance to see if the overall tone might be improved due to the enhanced comb filtering.

Least Significant Bit
The other issue that we have with virtual amplifiers is the problem of the quantization effect of the least significant bit. Think about it this way, you have a light dimmer, as you turn the dimmer up, more light comes into the room. This is analog. in digital, you have to flip the light switch many times a second to get the light to continuously be in the room. In a digital recording system, we have to worry about what happens at the 0 to 1 Bit portion of the bit depth plot. When the audio signal dips below the 2 and 1 bits because it is reducing in volume, the computer remembers acts as 1's and 0's, electricity on or off. At 1 bit, it still thinks this audio is "on", but below the 1 bit, in analog, there is many decimals for the audio to hang out at before it goes to nothing. In digital land, it is an electrical limbo, and the computer is not sure what to do with it. We get a quantization error. To overcome this, we put a virtual noise floor called Dither into the 0-1 bit depth, so technically the computer is always quantizing and sampling, it never stops and shuts off the light switch.

But in recording the guitar, the natural interaction of the amplifier which might make those last notes ring out a lot more; would be cut off by this quantization error and reduce the signal below the dither protocol, thus we might have reverb tails end quicker and less natural.

What can you do?
How do we make those virtual guitars sound more natural? There are a couple of steps we can do.

1) Add a small amount of delay with significant feedback to the guitar in order to extend those big long drawn out notes. This will help the virtual plugin handle the LSB (Least significant bit) and extend your distortion or FX times to a more natural sound

2) Add reverb pre-virtual plugin. This doesn't really apply to fast runs, but for those long drawn out notes and chords, it sure will. Automate the reverb in so it only pops in during the parts where you are struggling with keeping the guitar sustained.

In the end, we use virtual instruments for a number of reasons; we live in apartments and can't make loud noises, we want to change the tone of a sound, we don't know how to play the guitar so we use an instrument we can play and try to make it sound like a guitar. However, nothing can replace a well-played guitar, but if we think about the specifics of what makes it such an awesome instrument, then we can sure try to get close.