Press Release: The DiGiCo SD App is compatible with all consoles in the SD Range and allows users to take advantage of both Apple and DiGiCo’s touch screen technology.
The advent of the DiGiCo SD App means that your iPad becomes a remote control surface and also an expansion of the control surface. This application takes the existing feature set and presents it in a new way to take advantage of the extra screen. This allows engineers to implement very specific functions dedicated for FOH or Monitors.
Aimed at installation and touring applications, the DiGiCo SD App includes a number of dedicated screens that open up the iPad surface to a selection of the consoles’ functionality. For example, there are eight macros available on the hardware buttons of an SD9, but by connecting the iPad via the DiGiCo SD App, a large number of user-defined buttons will be available; these can reside on the iPad screen, allowing for quick access, while the console remains clear to mix the show on.
“The SD App adds a new level of versatility to our SD consoles,” says DiGiCo’s David Webster. “It makes mixing a complex show or working with an extensive installation even easier than it was before.”
Posted by TheAudioPod at 5:00 AM No comments: Posted by TheAudioPod at 5:00 AM No comments:

Press Release : Clear-Com® has introduced the new LINQ™ product line, providing the industry with the next step in intercom/audio linking technology, based on Clear-Com’s patented I.V.-Core technology. LINQ interfaces are compact devices that enable connection of two-wire partyline with call signaling and four-wire audio over LAN, WAN or Internet IP infrastructures.
LINQ is available in two-wire (LINQ-2W2) or four-wire (LINQ-4W2) options. The LINQ-2W2 is both Clear-Com and RTS TW compatible. The LINQ-4W2 can interconnect with devices, such as analog ports of any matrix intercom system, analog telephone circuits, two-way radio gateways and audio consoles. A maximum of six LINQ IP interfaces can be linked together in any 2- or 4-wire combination.
LINQ uses the OPUS high quality audio CODEC. The bitrate, bandwidth, and delay can be changed quickly and smoothly without introducing any distortion or discontinuity in the audio. As a low audio latency communication link, LINQ can be used for natural intercom conversation, networked music performances and for audio signals that are transported via different facilities (transmission synchronization).
The creation of virtual partylines within a linked group is an exclusive feature. Channels from any of the six devices in the network can be linked to create common virtual partylines. At least two channels must be associated to each other. LINQ utilizes a touch-friendly web-based user interface to configure, control and monitor any device within a linked group.
Stephen Sandford, Product Manager, Clear-Com, said, “Clear-Com continues to lead the field of connecting or extending intercom over IP. LINQ is a simple yet significant development that enables users to expand their remote communications quickly and easily.”
Posted by TheAudioPod at 5:00 AM No comments: 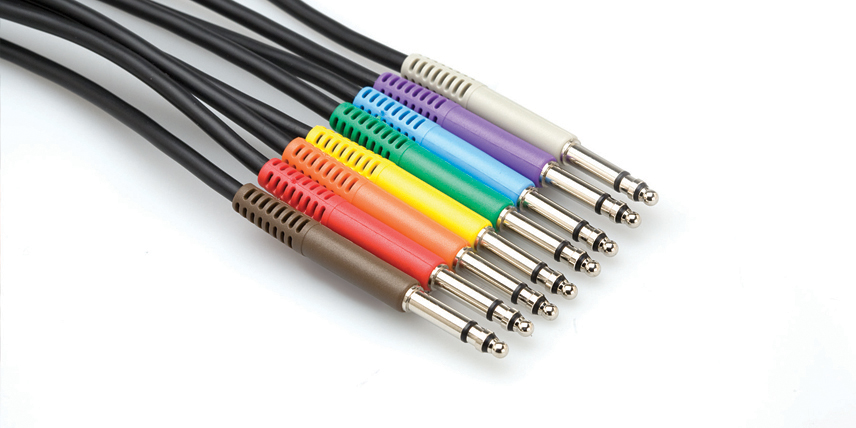 Press Release : Hosa Technology, is pleased to introduce the latest line expansion to the Hosa Pro line of cables. The new Hosa Pro Breakouts make the process of interfacing consumer audio products with professional equipment easier than ever. With Hosa Pro Breakouts, any consumer audio product equipped with a stereo minijack output can seamlessly be interfaced with professional units sporting quarter-inch Tip/Sleeve, XLR, or even RCA connectors.
Hosa Pro Breakouts are available in three configurations. The 3.5 mm TRS (tip/ring/sleeve) to dual RCA option—identified as the HMR-000Y Series—is ideal for DJ mixers or home stereo systems. The 3.5 mm TRS to dual 1/4-inch TS (tip/sleeve) breakout—identified as the HMP-000Y Series—can be plugged into patch bays or a mixer’s phone inputs. The third category, the 3.5 mm TRS to dual XLR3M breakout—known as the HMX-000Y Series—is ideal for connecting into discrete channels on a professional mixer or similar interface.
As users of Hosa cable products have come to expect, the new Pro Breakouts line is manufactured from the finest materials. All three configurations utilize nickel-plated REAN connectors (a brand of Neutrik AG, the industry’s connectivity leader) for efficient signal transfer and durability. Equally notable, these cables sport 24 AWG Oxygen-Free Copper (OFC) conductors for enhanced signal clarity and 90% OFC spiral shields for a higher signal to noise ratio. These materials, combined with Hosa’s world-class workmanship, result in truly superior cable products designed to provide exceptional audio performance and years of trouble-free use.
Jose Gonzalez, Hosa Technology’s Product Manager, commented on the company’s new Pro Breakout cables, “The growth of portable audio products such as iPods, smartphones, and tablets has changed the requirements of live audio. Even in the most professional live audio and studio setups, people frequently need the ability to add a consumer media player into the mix. When this situation arises, they need to be able to count on the cable they’re about to patch in. Hosa Pro Breakouts make trusting one’s cable easy. All three configurations make the process of interfacing consumer audio products with professional gear quick and seamless.”
The HMR-000Y and HMP-000Y Series are available now and include their respective cables in 3-, 6-, and 10-foot lengths. The dual XLR3M HMX-00Y Series will be available January 2015, in 3-, 6-, 10-, and 15-foot lengths.
About Hosa Technology
Headquartered in Buena Park, CA, Hosa Technology, Inc. is the leading supplier of analog and digital connectivity solutions to the musical-instrument and professional-audio industries. Since the company’s inception in 1984, Hosa Technology’s consumer-driven inventory has expanded to include a full line of audio, video, and computer products. Enthusiasts and professionals alike rely upon Hosa Technology to deliver world-class performance and value both on the stage and in the studio. For more information about Hosa Technology, please visit www.hosatech.com.
Posted by TheAudioPod at 5:00 AM No comments:

Press Release: The Audio Engineering Society is set to host its 57th International Conference on Friday, March 6 – Sunday, March 8, 2015, in the Hollywood neighborhood of Los Angeles, California, at the renowned TCL Chinese 6 Theatres in Hollywood, with hotel accommodations across the street at the historic Hollywood Roosevelt Hotel. With the participation of industry partner SMPTE – the Society of Motion and Television Engineers – and following on the heels of the highly-successful Sound for Picture program track at the recent AES137 International Convention in L.A., the 57th Conference is perfectly positioned to set yet another milestone for the AES. With a direct focus on the Future of Audio Entertainment Technology, this conference will explore the latest issues facing audio professionals today in regards to cinema, television, online content and more, and is being co-chaired by Brian McCarty and Dr. Sean Olive.
Sound production for multi-media has evolved over a much different route than the more unified approach taken by the producers of visual assets, and this approach has left a streamlined production path for motion pictures but a complex and expensive production path for sound. Several dramatic changes are occurring in cinema exhibition, with “immersive sound” being the new buzzword. While Ultra High Definition Television (UHDTV) looks to be the next step in home entertainment, consumers are increasing their use of personal media devices, with headphones and portable audio looking to be a major segment of the entertainment technology future. This first-ever Future of Audio Entertainment Technology Conference brings together the best researchers, acousticians and engineers to address the current and future audio needs of the cinema, television and Internet (online) mediums.
Also of note at the AES 57th Conference is the SMPTE report entitled B-Chain Frequency and Temporal Response Analysis of Theatres and Dubbing Stages in regards to current standards and practices regarding B-chain electroacoustic response and calibration (https://www.smpte.org/standards/reports). The paper was produced with extensive participation from AES members and will serve as a foundation for further necessary advancements in audio technology in the Sound for Picture arena.
Topics slated to be covered at the AES 57th International Conference include:
30-year veteran Hollywood sound engineer Brian McCarty, co-chair of the conference, said “AES expertise has been responsible for major improvements in live sound, streamlining of game audio production, and advancements in music production. The AES has called this conference to bring together the traditional production communities of cinema and television with the ‘new media’ audio distribution channels to address current and future audio needs.”
AES Past President and 57th Conference co-chair Dr. Sean Olive states, “This is the first international conference of its kind focused solely on audio applications, technology and research related to sound in cinema, television and multi-media. It’s exciting to be hosting this event in the entertainment capital of the world, where many audio-visual content creators, scientists and engineers live and are able to participate in this historic event.”
“SMPTE has been involved heavily in examining and exploring ways in which standards work can help to enhance the production, delivery and presentation of audio for moving images,” said Barbara Lange, SMPTE executive director. “We partnered with the AES at the AES137 International Convention to deliver compelling sessions addressing the future of audio engineering in both the cinema and television sectors. The Conference gives us another chance to work closely with the AES to offer industry members a fresh look at critical issues and advances in the realm of audio and visual entertainment technology.”
For further information on the Audio Engineering Society AES 57th Conference visithttp://www.aes.org/conferences/57/.
Posted by TheAudioPod at 5:00 AM No comments: